Growing up pumpkin pie wasn't my favorite. I loved the cool whip my mother would top the pumpkin pie with, but I would avoid the pumpkin part. That has changed over the years and I look forward to a piece of pie each year if someone in my family (usually me) decides to make a gluten free pie! This year I didn't want to wait until Thanksgiving for my pumpkin fix so I set out to make a no bake dessert I could keep in my freezer to satisfy my pumpkin pie craving! These little bites taste so similar to pumpkin pie, but with the much welcome addition of chocolate! 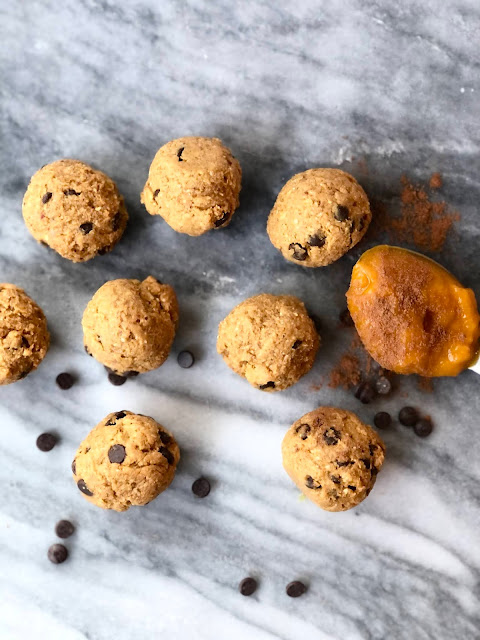 1/2 cup canned pumpkin ( make sure it's not pumpkin pie filling or it will be too sweet!)

1/4 cup mini chocolate chips, I like Enjoy Life to keep these dairy free

1) Put the 1 cup of dates in a glass measuring cup and cover with water. Microwave the dates and water for 30 seconds and then allow to soak for 5 minutes until the dates soften. Drain the water off and add the dates to the bowl of a food processor.

2) Pulse the dates until they are smooth. Add the coconut butter, pumpkin pie spice, cinnamon, pinch of sea salt, vanilla, and pumpkin. Pulse again until the mixture is combined.

3) Add the 1/2 cup of oat flour and pulse until the dough comes together. It will still be sticky but that's okay. Remove the blade and stir in the mini chocolate chips.

4) Place the dough in the refrigerator for 20 minutes to set.

5) Use a small cookie scoop to make 18 pumpkin bites.

6) Place the pumpkin bites back in the refrigerator for another 15 minutes to set.

Store in a sealed container in the fridge for up to 4 days or freeze for up to 3 months. I prefer them frozen or just slightly defrosted. 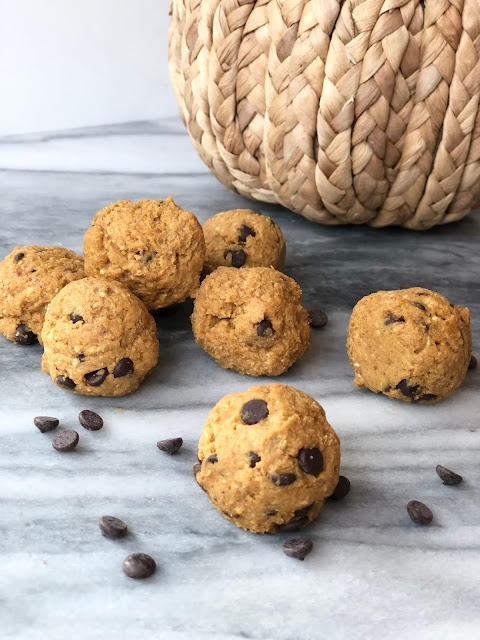 Posted by Lydia Kohrs at 2:01 PM No comments:

I have been looking at pumpkin soup and chili recipes for a long time trying to decide if I wanted to try one. None of them had the ingredients I was looking for, or they contained foods I couldn't have. I decided to create my own and this "stoup" isn't quite a soup or a stew, and definitely not chili, hence the name. It is so comforting and full of so many nutrients I could eat it anytime of day, even for breakfast! The sweetness of the sweet potatoes and pumpkin, plus the earthiness of the herbs gives it such great flavor! If you can handle onions feel free to add 1/2 a cup of chopped onion after you cook the chicken. 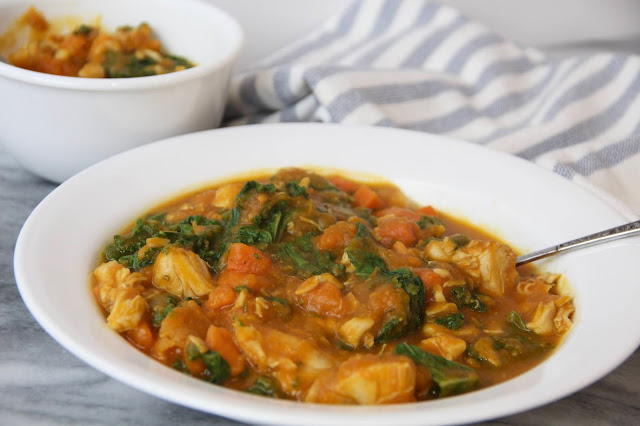 1) In a large soup pot set to medium heat add the 1/2 TBSP olive oil and 1 pound of chicken cut into pieces, sprinkle lightly with sea salt. Cook the chicken for 5-7 minutes until browned and cooked mostly through.

3) Bring to a boil over medium high heat, stir, and then reduce to a simmer. Simmer for 25 minutes until the potatoes and carrots are soft and the mixture starts to thicken.

4) Add the chopped kale and cook for another 5 minutes until the kale is tender.

5) Check to see if more salt is needed and add accordingly, serve with an extra sprinkle of sea salt.

This soup will keep in the fridge for 4 days and also reheats very well after being frozen in individual servings. 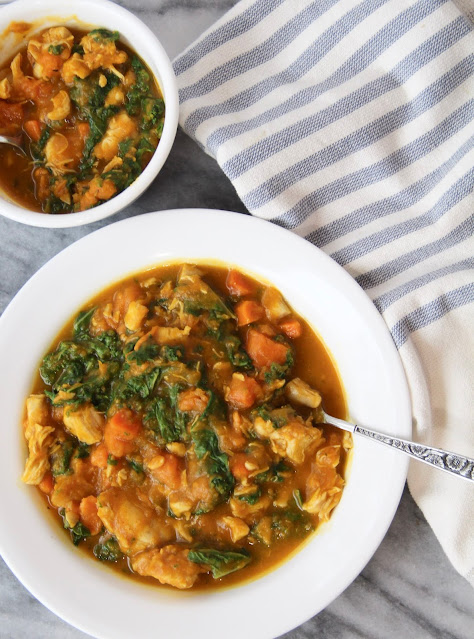 Posted by Lydia Kohrs at 1:45 PM No comments: 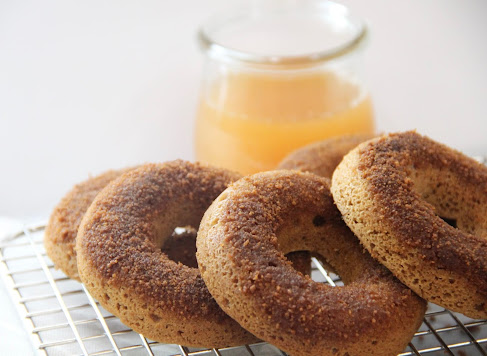 When we were dating my husband and I took a day trip to Nebraska City. It is the home of Arbor day, the Apple Jack Festival, and the world's best apple cider donuts! Brian had his first taste of a warm apple cider donut from Kimmel Orchard and that led to him eating six donuts that day. We still laugh about it each year when we visit the orchard. I haven't seen a gluten free apple cider donut at any orchards or pumpkin patches around town so I decided to make my own! The amazing apple cider flavor in these comes from reducing the cider before adding it to the batter. I was surprised how much they tasted like the original, even though they aren't fried! I haven't had a real one in seven years but my son claims they tates just as good. You can easily make these dairy free also by subbing coconut oil or vegan butter, I tested it with Myikono's brand. 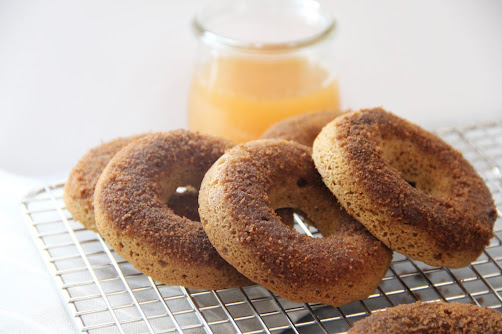 1) Pre-heat oven to 350 and generously grease your donut pan with coconut oil, cooking spray, or butter

2) To reduce the cider pour the 1 1/2 cups of cider in a small saucepan over high heat and bring to a boil, reduce the heat to medium-high and cook until it is reduced by half, you will want 3/4 cup of cider at the end. It took me about 10 minutes. I emptied the cider a few times into a glass measuring cup during the process to see how much it had reduced. Don't skip this step! This gives them a great cider flavor like the fresh donuts at an apple orchard!

3) In the bowl of a stand mixer beat the butter and sugar until creamy, about 3 minutes.

4) Add the egg and mix until incorporated.

6) With the mixer on low slowly incorporate the dry mixture.

7) Gently pour in the cider and mix a few times to combine.

8) Divide the batter evenly among the donut pan, filling each donut 3/4 of the way.

10) Remove the donuts to a cooling rack.

11) In a shallow dish mix the 1/2 cup of coconut sugar and 1 TBSP cinnamon for the topping. Melt the 2 TBSP of dairy free butter in the microwave in a small dish.

12) Brush each donut with the melted butter and then dip in the topping mixture.

These are best served fresh or the day of. If you are going to save them I recommend freezing them before adding the topping, defrost for 20 seconds in the microwave and add the melted butter and sugar topping right before serving.
This recipe was modified from
https://www.bobsredmill.com/blog/recipes/gluten-free-apple-cider-donuts/ 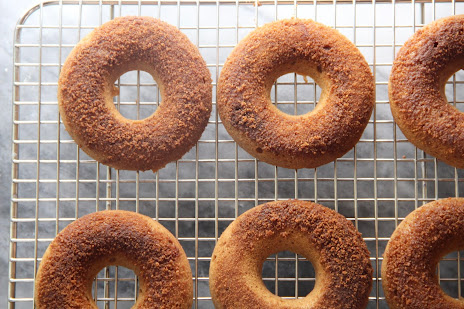 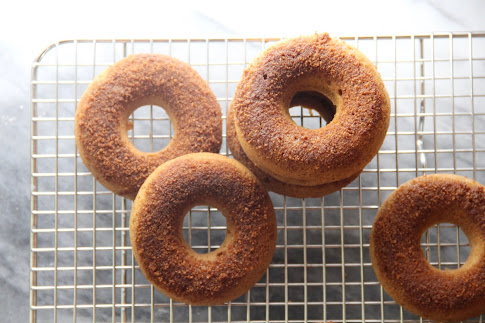 Gluten Free Runza Casserole
Have you ever had a Runza? They are a delicious mix of beef and cabbage baked into a fluffy dough. There is a Runza fast food chain in Nebraska and I grew up eating them. They are also one of the local foods served at Nebraska Cornhusker football games when you visit Memorial Stadium. I know it's not a Husker game for a lot of fans unless they have had their Runza! Over the years I made homemade versions based on a recipe from my mother and they became a staple at our Husker parties each Fall. I struggled to make a good gluten free dough that would hold the mixture well. So I set out to create an easier version that my whole family loves. It doesn't require waiting on dough to rise, and can easily be made gluten and dairy free! I hope you love this Runza casserole just as much as we do! 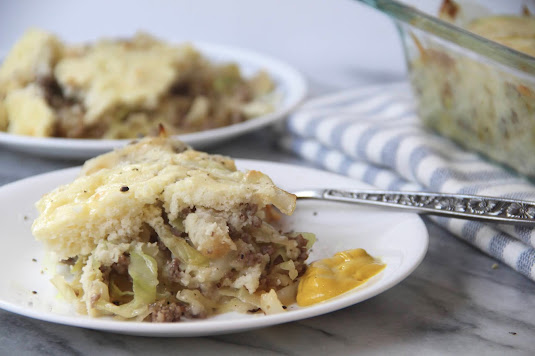 Gluten Free Runza Casserole
Ingredients
1 lb ground beef
2 tsp sea salt divided ( use less if using table salt)
1 1/2 tsp freshly cracked black pepper ( use less if using fine ground pepper)
1/2 cup diced yellow onion (optional) I leave this out now and no one notices.
8 cups finely shredded green cabbage
1 cup of white cheddar or provolone shredded cheese
1 1/2 cups gluten free bisquick mix
2 eggs
2 cups of non-dairy unsweetned milk, or regular milk ( I use silk unsweetened coconut)
Directions
1) Pre-heat oven to 350, coat the bottom and sides of a  9x13 glass pan with cooking spray or olive oil and set aside.
2) In a large skillet over medium high heat add the ground beef and 1/2 tsp of the salt. Cook the beef until brown and then remove to a bowl and set aside.
3) In the same skillet ( do not drain the fat it adds flavor!) add the 1/2 cup of diced yellow onion if using, the 8 cups of cabbage, 1 1/2 tsp of salt 1 1.2 tsp of cracked black pepper. Cook the cabbage until it has softened and shrunk to about half it's size. This will take about 5-8 minutes.
4) Add the ground beef back into the skillet and cook another 1-2 minutes to combine the mixture.
5) In a large bowl mix the eggs, bisquick, and milk with a whisk.
6) Pour half of the bisquick mixture into the greased 9x13 pan.
7) Gently scoop the beef and cabbage mixture on top of the bisquick layer.
8) Sprinkle 1/2 cup of the cheese on top of the beef and cabbage mixture.
9) Top with the remaining bisquick mixture, use a spatula to make sure it is spread evenly. Sprinkle with the remaining 1/2 cup of cheese.
10) Bake for 30-35 minutes until top is set and starts to brown.
Enjoy!
We like to serve ours with mustard and ketchup on the side to dip it in!
Can be kept up to 4 days in the refrigerator covered. This dish also heats up well in the microwave or air fryer! 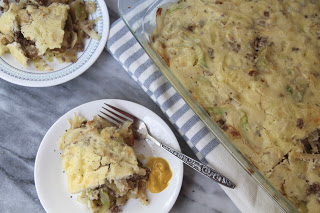 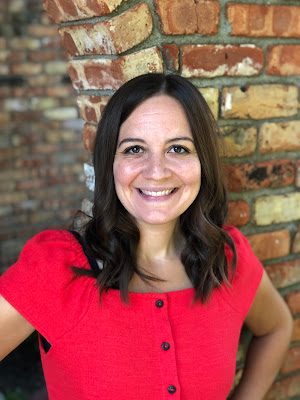